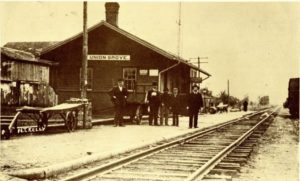 The first settler here was John E. Dunham, who in 1838 built a frame house on what is now Main Street. In 1854, agents from the Racine, Janesville & Mississippi Railroad Co. began buying up right-of-way land just north of Mr. Dunham’s land. Apparently not very pleased about the new railroad, Mr. Dunham sold his land to P. P. Faber, who opened the first store about the time the railroad was built. William H. Reid was also engaged in merchandising and was one of the early postmasters. Growth and commerce continued in the area immediately around the railroad.

On January 26, 1856, a mass meeting of the citizens was held and an association formed for the purpose of laying out a town. Of this association Dr. A. P. Adams was president; James Russell, vice-president; Gideon Morey, secretary, and S. H. Skewes, treasurer and sales agent. C. M. Sprague was employed to make a survey and plat and he completed his work on February 21, 1856. On March 18, 1856, the Union Grove Company was incorporated by act of the Legislature, with an authorized capital stock of $50,000. The Village got its name from Governor Dodge, who combined the school’s name (“Union School”) with “grove” for the beautiful grove of burr oak trees on the west side of Highway 45.

By 1950, Union Grove’s population was 1,358 and it has steadily grown over the decades to just over 5,000 by 2020. Although the railroad was removed in 2014, Union Grove is a well-traveled area due to its location at Hwy. 45 and Hwy. 11 and proximity to I-94. The Village maintains its small-town charms and prides itself as a high-quality place to live, work and raise a family.

Following is a timeline of historical events in Union Grove provided by Greater Union Grove Area Chamber of Commerce:

First Home
In 1838, John E. Dunham came from the East in search of a new home and settled in Southeast Wisconsin. He purchased 80 acres and built the first house and barn. It was located where the Chartier Hotel used to stand at 1003 Main Street.

First School
In 1846, the first school house was built and called Union School, because it brought together several outlying school districts.

How The Village Got Its Name
The village got its name from Governor Dodge, who combined the school’s name with grove for the beautiful grove of burr oak trees on the west side of Highway 45.

1882: The first brick school was constructed with the west wing added in the 1890’s. In the 1920’s, the building became Union Grove’s Masonic Temple.

1903: State Bank of Union Grove incorporated and erected a building on the east side of Main Street.

1905: Box stoves were discarded from the elementary school, and pot-bellied upright, coal burning stoves were installed.

1910: Meeter’s Kraut Factory was built in Union Grove. G.R. “Bob” Cornell was plant manager. In addition to sauerkraut, pickles and tomatoes were processed at various times at the factory.

1914: The Union Grove Lumber and Coal Co., with Merritt Anderson as manager and John Huck, secretary, served the Union Grove area with quality coal and building materials of all kinds from lumber to fencing, beginning this year.

1916: During the early morning hours of Friday, March 24, a disastrous fire broke out. The fire engulfed eleven of the most important and centrally located business institutions on the west side of Main Street. This was one of the largest, most disastrous fires that Union Grove has ever witnessed.

1917: Racine-Kenosha Joint County Training School for Teachers was established in Union Grove. Arthur J. Smith was principal and Blanche E. Roberts was the supervising teacher. The school building was completed.

1919: Southern Wisconsin Home for the Feeble-Minded opened. It became an expansive community with buildings later placed on State & National Register of Historic Buildings.1919: On December 31, Post 171, American Legion was chartered.

1923: Union Grove library moved to a small office building formerly occupied by the Dardis Lumber Co. located at the corner of 10th and Main.

1925: The Union Grove Methodist Church was originally located on Church Street, north of the railroad tracks. The building was moved to its present location at the corner of State Street and 12th Avenue. Also in 1925: The Union Grove Graded School on 14th Avenue was erected. Roy Lehman was the principal and upper grades instructor.

1928: Mr. and Mrs. Charles Hackett came to Union Grove and began publication of the U.G. Sun.

1932: Dr. John W. Owen came to Union Grove in 1932 to practice dentistry. His first office was on the second floor of Hauper’s Drug Store on the west side of Main Street.1932: Permanent village library opened in the Parkway Hall on November 3.

1933: The first library board was organized on July 8: John Bowers as President, Wesley Shepard as Secretary-Treasurer, and William Roberts and Edward H. Swantz as Directors.

1934: Attorney H.H. Brown came to Union Grove in August. He purchased the law practice and home of Attorney O.R. Moyle. The Office was located in the second story of the “Kemp” building at 1114 Main Street.

1936: Ernie Swantz purchased the hardware store in the 1100 block of Main Street. The store had been formerly operated by Peter Dunkirk. Swantz handled wood heating stoves, kerosene and a complete line of hardware. Drought reduced crop yields and farm income that year.

1937: Dr. and Mrs. Owen Purchased the Callender residence at 1201 Main Street and moved his office and their home to that site for their dentist office.

1938: The elementary grade school didn’t have any clerical help in the office and there was only one custodian.

1941: When war was declared on December 8, Union Grove began to settle down to the business of fighting the war. The village was organized for civilian defense and any emergency.

1942: On July 8, a group of women were appointed to distribute ration books. At headquarters, the books were explained as to the number of “points” allowed for each person in sugar, meat, fat, oils; four pounds per person was allowed for well fed Americans. Also in 1942: The Rescue Squad was formed with Dr. T.H. Wooley serving as the First Captain.

1943: In September, the purchase of a Rescue Squad truck was made possible by donations from interested parties, the American Legion and the Village Fire Department. Also in 1943: Elmer Hansen was killed in action in WWII.

1945: The Red Cross begins asking for supplies. The Red Cross says, “There are over ten thousand men and women from Racine County serving in the war, and Union Grove must not fail the Red Cross.”

1946: This year brought a drive for used clothing for European war refugees. C.W. Price resigns from the mail route after forty-one years. Sugar rationing is still on.

1949: Union Grove Lions Club was chartered. Also in 1949: Willie Markisen became Captain of the Rescue Squad. Also in 1949: Addition to High School was added in the fall.

1950: Three classrooms and a multi-purpose room were added to the 14th Avenue school location.

1952: Two full time music instructors were engaged, one for instrumental and one for vocal study.

1964: On November 1, Rev. Keith Moore officiated at the ground-breaking ceremony for the new location of the Union Grove Baptist Church on Highway 11, west of the Village of Union Grove. It cost between $90,000 and $100,000.

1966: An addition doubling the size of the high school consisted of a new gym, library, classroom, and business education areas.

1967: The new education wing was completed on the Union Grove United Methodist Church. It was put into use later that year for Bible School and Sunday School.

1972: The Dover Branch of the State Bank of Union Grove was opened on Highway 11.

1973: American Roller construction began on a new facility in Union Grove. It now houses the Research and Development Laboratory, which services all American Roller facilities, and the Arcon Division, which manufactures small rollers in quantity, mostly for original equipment manufacturers.

1976: July 20, the Overson Subdivision of the Village of Union Grove was recorded.

1986: Union Grove Chamber of Commerce expanded to include Greater Union Grove Area, as well as opened the first office in Police and Fire Department at 700 Main Street and hired their first employee.